Southwark Liberal Democrats are calling on the Mayor of London to take urgent action to stop the RV1 bus service being cut in half. 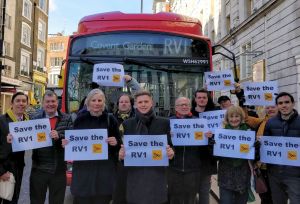 Borough Liberal Democrat councillors David Noakes, Adele Morris and Maria Linforth-Hall have written to Transport for London (TfL) to demand that the plans are immediately halted so that residents can have their say.

Liberal Democrat candidate for Borough and Bankside Victor Chamberlain has also launched a petition, which will be handed to Liberal Democrat Assembly Member Caroline Pidgeon and presented to the Mayor at the London Assembly Plenary meeting in March.

Last week TfL announced out of the blue that they plan to reduce the RV1 service from six to three buses an hour. The service is well used and loved by local residents, office workers, commuters and tourists. It is the only bus that connects Covent Garden, London Eye, South Bank, Tate Modern, the Globe, Borough Market, Tower Bridge and the Tower of London. The RV1 is notable as one of the few zero emission routes as it is operated by a fleet of hydrogen powered buses.

TfL claim that demand for the RV1 has fallen significantly in the last year. However, during this time there have been major temporary diversions to the route on Tooley Street and on Upper Ground.

Local councillor David Noakes said: “The RV1 is a lifeline to many communities around Borough, Bankside and London Bridge. Many older residents and those who want a cheaper option than the tube rely upon it. Residents are up in arms that no one has asked for their opinion.”

Cllr Adele Morris added: “Local people know that the RV1 has been on temporary diversion to allow the improvements at London Bridge to take place. This is bound to have reduced the number of users this year but users will return when the full service does. The RV1 is a valuable local resource that residents want to keep”

Local resident Victor Chamberlain who has launched the petition to the Mayor said: “I live in Borough and work in Covent Garden. I know how useful the RV1 is to local people and visitors. It’s outrageous that the service has been halved without anyone even asking our opinion. When we need to cut air pollution it just doesn’t make sense to cut a zero emissions bus. I hope the Mayor puts a stop to this as a matter of urgency and we can save the RV1.”

Deputy Chair of the London Assembly Transport Committee and Liberal Democrat Assembly Member Caroline Pidgeon AM said: “Before the Mayoral election Sadiq Khan promised that “as the son of a bus driver” he would be the champion of our buses. Under his Mayoralty London bus services are getting worse and the loss of the RV1 is just the latest cut he has implemented. The RV1 is a vital resource for the thousands of tourists that use it on weekly basis connecting them to many of London’s top attractions and popular areas. The Mayor needs to listen to the needs of local communities and tourists and reverse his cuts.”