Cllr Chamberlain is now Southwark Council’s Leader of the Opposition after his predecessor Cllr Hamish McCallum stood down.

The Southwark group leader is committed to focusing on holding the administration to account particularly on the need to go greener, faster; on delivering more affordable housing; and on improving customer services.

Cllr Chamberlain was elected as a councillor for Southwark’s Borough and Bankside ward in 2018. He became vice-chair for the authority’s main scrutiny committee two years later. 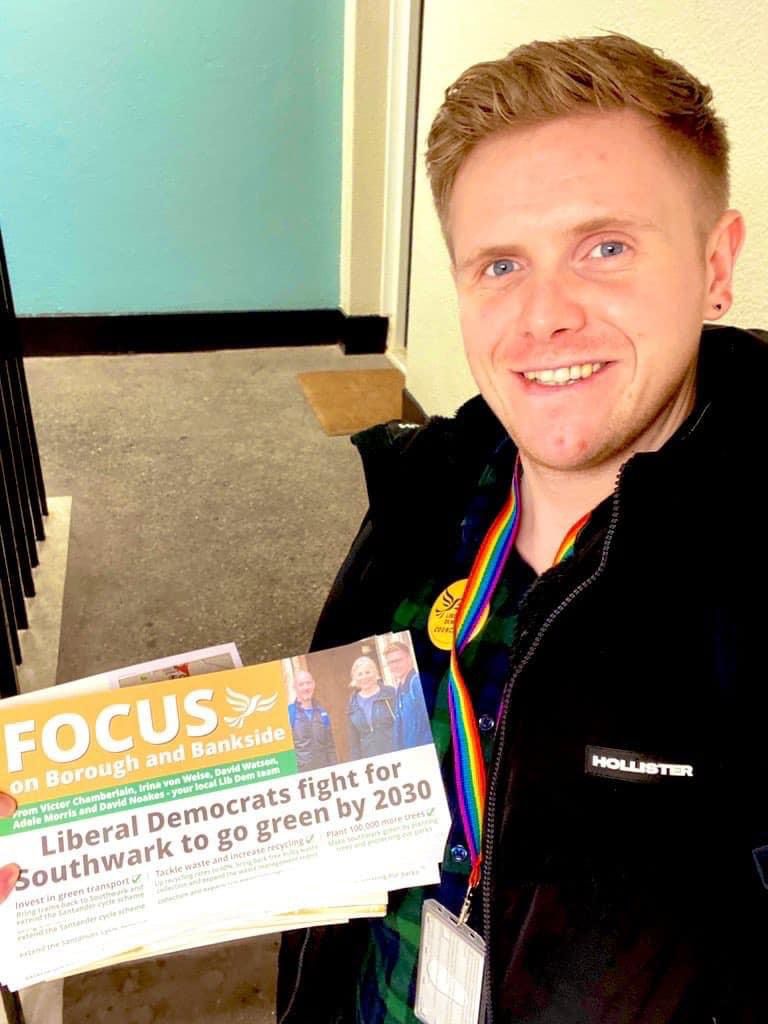 As vice-chair of the council’s scrutiny body, the overview and scrutiny committee (OSC), Cllr Chamberlain was at the forefront of Liberal Democrat opposition to Labour policies.

He led the successful Southwark Liberal Democrat campaign on climate change, which saw the Labour party commit around £13m to tackling the climate emergency.

A passionate environmentalist, Cllr Chamberlain ran the London-wide campaign to save the RV1. The capital’s first hydrogen bus was eventually scrapped by the city’s mayor Sadiq Khan.

Southwark’s new group leader is an active LGBTQ+ campaigner. He fought to save famous gay bar XXL and helped secure a new LGTBQ+ community centre in in its place at Bankside Yards.

He requested that the Labour council leader clarify his group’s view on transgender rights, but had no response from Cllr Kieron Williams.

Cllr Chamberlain intends to table a motion on transgender solidarity at the July Council Assembly meeting.

“I am immensely proud to have this fantastic opportunity to lead Southwark’s hard-working and talented group of Liberal Democrat councillors after the elections.  London is a liberal city and I will champion why the Southwark Liberal Democrats are the best placed to stand up and fight for local residents. We are up against a massive London Labour party machine. We must ensure there is a clear and strong opposition in Southwark particularly as Labour are in disarray. They have had to suspend the whip from one MP after an allegation of racism. They financially rewarded a disgraced councillor who resigned from a cabinet post after disrespecting residents online. This party refuses to listen to anyone, but its own circle. I am determined to ensure Labour pays attention to its residents. Southwark Liberal Democrats will continue to lead positive campaigns around the climate emergency, affordable housing and council services.”